Bovine tuberculosis a major source of human tuberculosis in Nigeria. According to recent reports Nigeria ranks 4th in TB infection worldwide. Statistics also shows that 80% of TB cases in Nigeria are undetected and it claims 1.2 million lives annually,this is a sad scenario for a disease that is preventable and treatable. 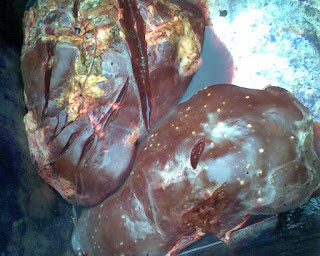 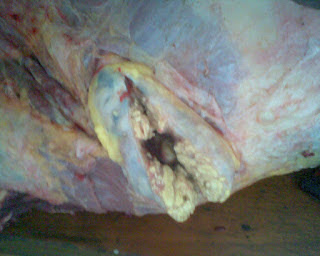 Bovine tuberculosis has been identified as a major source of human tuberculosis infections which is usually fatal because of late detection and non-diagnosis.

Tuberculosis caused by Mycobacterium spp is usually transmitted by aerosol route when one comes into contact with droplets of infected persons. The bacteria can also be transmitted through consumption of products from infected animals such as beef and unpasteurized milk.

Tuberculosis can affect anybody but there is a higher incidence in men than women,and its also an occupational hazard for butchers,food processors, farmers and veterinarians.


The majority of infections in Nigeria can be traced to the abattoir,making it a foci of infection and re-infection. A percentage of cattle brought in for slaughter often are confirmed as having bovine tuberculosis,with the offals, and lymph nodes riddled with tubercles as shown in the picture.

Butchers often refer to lungs with TB as "fuku elegusi" and in a bid to convince you its okay,cut part of the raw meat and eat it. This singular act by butchers have caused deaths of many of them who eventually develop tuberculosis,which is usually generalized.

When the butchers start coughing,nobody thinks its TB, they start taking antibiotics for the cough but it does not stop it. These prolonged used of various antibiotics is the reason there is a prevalence of the drug-resistant type of TB. 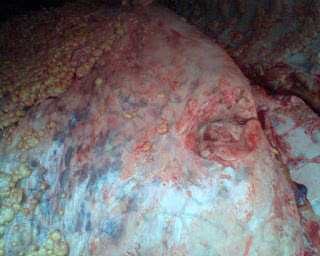 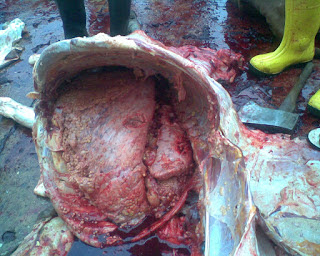 These butchers still handle beef,working in the abattoir and spreading the droplets everywhere and even in their homes. Living conditions of most the people working in abattoirs is such that droplets can spread fast,as most live in congested rooms with poor ventilation and very dirty environment.

A study carried out shows that most of the butchers have tuberculosis,but this is under reported as many of the butchers dont believe TB is real or can cause deaths,instead they link these deaths to rivalry and arrows from jealous colleagues.


Veterinarians and public health officials are also at great risk of infection. Post mortem inspection is a major point of infection,handling the tuberculous organs is another route of infection and also consumption of tainted meat or offals .

Tuberculosis infection in officers have been overlooked sometimes,going undiagnosed and thereby potentiating the spread.

An officer who served for an extended period in the control post and abattoir recently died of cerebral tuberculosis,buttressing the study that bovine tuberculosis is a key factor of tuberculosis infection in man.
Posted by Bolanle Ojuri at 11:12 PM