Cockroaches are on demand in pharmaceuticals in China who believe the insects can be used to cure stomach, liver and heart ailments. Cockroach milk as food supplement for human consumption. A new research indicates that cockroach milk can be transformed into a food supplement worthy of human consumption in future. “Protein crystals in cockroaches have a whopping three times the energy of an equivalent mass of buffalo milk and about four times the equivalent of cow's milk” said Leonard Chavas, one of the scientists behind the research. 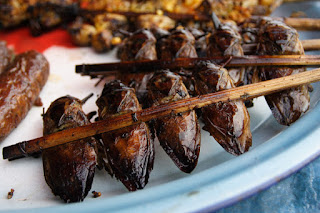 Scientists revealed that the insect’s liquid takes the form of protein crystals in the guts of baby cockroaches. “The Pacific Beetle Cockroach feeds its bug babies a formula which is remarkably rich in protein, fat and sugar and was found to be complete food. The proteins in the particular species of the insect have high energy content that it helps infants within this unique species grow much bigger than cockroach babies of other species.
Posted by Bolanle Ojuri at 12:04 AM