. AGRIBUSINESS:: COVID-19 may stall Nigeria’s rollout of GMO cowpea. The COVID-19 pandemic may delay the rollout of pest-resistant Bt cowpea, Nigeria’s first genetically modified (GM) food crop. The country’s lockdown, imposed to stop the spread of the new coronavirus, has made it difficult to get the improved seeds out to farmers, said Dr. Rose Maxwell Gidado, the country coordinator for the Open Forum on Agricultural Biotechnology (OFAB) Nigeria chapter. ALSO READ:10,000 farmers to benefit from World Bank-assisted project in Lagos. The government’s decision to allow the commercial release of Bt cowpea, which resists the destructive pod borer insect without the use of pesticides, elicited excitement among Nigerian farmers. They have been eagerly awaiting the planting season to try the new crop in their own fields after battling pod borer (Maruca) infestations for years. The Maruca outbreaks have been so severe, and the crop losses so significant, that a number of farmers have quit growing cowpea out of frustration. They saw hope in the Bt cowpea, which scientists have determined confers 100 percent protection against Maruca through the use of genetic modification to introduce the Bacillus thuringiences (Bt) gene.
Posted by Bolanle Ojuri at 8:47 PM No comments: Links to this post

AGRIBUSINESS: How fishmeal and oil alternatives can support aquaculture growth.

AGRIBUSINESS: How fishmeal and oil alternatives can support aquaculture growth.As the world increasingly turns to aqua farming to feed its growing population, there's no better time than now to design an aquaculture system that is sustainable and efficient. Researchers at UC Santa Barbara, the University of Tasmania and the International Atomic Agency examined the current practice of catching wild fish for forage (to feed farmed fish) and concluded that using novel, non-fishmeal feeds could help boost production while treading lightly on marine ecosystems and reserving more of these small, nutritious fish for human consumption.
Posted by Bolanle Ojuri at 8:58 AM No comments: Links to this post

AGRIBUSINESS: Combined production of fish and vegetables can be profitable.

AGRIBUSINESS: Combined production of fish and vegetables can be profitable. When it comes to future food production, the combined farming of fish and vegetables through aquaponics is currently a hotly debated topic. But how realistic is the idea? Researchers have just published an extensive profitability analysis of a facility that already produces fish and vegetables on a large scale. The result: aquaponics may have both environmental and cost benefits -- if produced according to good agricultural practice and under suitable conditions.
Posted by Bolanle Ojuri at 12:20 PM No comments: Links to this post

Poultry biosecurity plans prepared humans for COVID-19. As state lawmakers continue to put stay-at-home orders in place, people could learn to be safe by implementing some of the steps associated with poultry biosecurity. 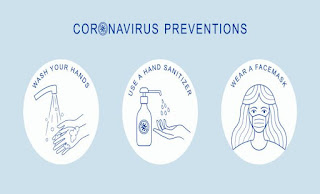 I can't count the number of presentations I have seen or articles I have had regarding poultry biosecurity. I am sure the same could be said for many within the livestock industry, making them a knowledgeable source to some extent. Due to the COVID-19 pandemic, there have been many recommendations floating around about how individuals should protect themselves, many of which have reminded me of steps taken on a poultry farm. Is this a time where a company could be very transparent and help consumers relate to the farm, therefore generating credibility/trust between producers and the general public? Obviously, we have all been told to stay home and minimize gatherings. Poultry farms do this daily by documenting the number of people that come in and out of the barns or enter gated areas.
Posted by Bolanle Ojuri at 6:23 AM No comments: Links to this post

Can COVID-19 lessons be applied more broadly to food?.

Can COVID-19 lessons be applied more broadly to food? 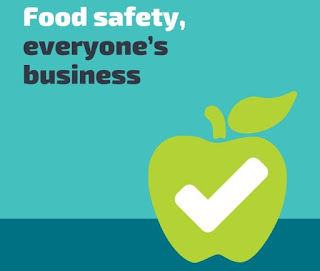 The difficulties and challenges brought under the spotlight by the novel coronavirus pandemic have, in reality, long existed Reports of millions falling ill, high numbers of deaths and damage to economies are all too familiar at the moment, but I want to take a break from reporting on COVID-19. Ahead of World Food Safety Day, organized by the World Health Organization (WHO) and the Food and Agriculture Organization (FAO), which takes place on June 7 this year, I thought it might be interesting to look at what food poisoning means for the global population and economy.420,000 people die each year from foodborne illnesses. While the novel coronavirus might still be relatively new, it has yet to claim that many lives. We are all now too familiar with the various costs that can be associated with disease. Foodborne illnesses are no exception, putting strains on healthcare systems, harming national economies and trade, and, ultimately, impeding socioeconomic development.
Posted by Bolanle Ojuri at 6:12 AM No comments: Links to this post

Agribusiness: Summit to explore scaling up innovation in agriculture.

Agribusiness: Summit to explore scaling up innovation in agriculture. The fourth Agri-Food Tech & Innovation Summit (AFTI EA 2020), hosted by the Africa Agri Council (AAC) is set to explore the upsurge in new thinking and the game-changing developments in agricultural practices and technology, and what is needed to scale these innovations to reach smallholder farmers and agribusinesses. "We have the technology and the innovations to make a difference, yet these innovations aren't reaching the smallholder farmers who need them most - they lack access to the right information at the right time," says Ben Leyka, AAC MD. The summit takes place between 25-26 March 2020 in Nigeria. Michael Hailu, director, CTA states that "with the right policies, innovation and investment, the continent’s agriculture could be transformed into a powerhouse not only to feed a growing population but to create decent employment for millions of young people." #Agribusiness #foodsecurity #foodsafety
Posted by Bolanle Ojuri at 7:35 PM No comments: Links to this post

The Lagos Govt Inaugurates Reform To End Sales Of Unwholesome Red Meat With A.T.M Strategy, which is a three-pronged approach to sanitize the red meat value chain. The purpose is to ensure that only wholesome beef is available to the populace. Prince Gbolahan Lawal, State Commissioner for Agriculture, said at the occasion that the state government was committed to sanitising the value chain. Lawal, flagging off the pilot scheme of the reform at Ita Faji Market in Lagos Island, noted that it would be done by embarking on three-pronged approach with the acronym A.T.M: Abattoir, Transportation and Market. The Honorable commissioner also stated that the reform would not only ensure the consumption of wholesome meat by the people, but it would also facilitate export of red meat to other countries. 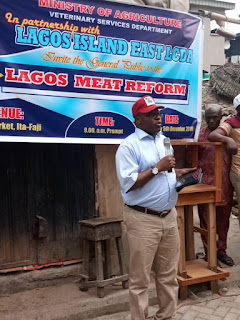 ( The Hon. Commissioner speaking about the reforms ) The commissioner said that the reasons some African countries like Botswana, Namibia, Ethiopia and Kenya could export meats to Europe, Saudi Arabia and other developed countries is solely because of the reforms they have been able to carry out in their red meat value chains which enable their red meat to meet the international standard. The pilot scheme of the A.T.M reform kicked off on the 5/12/19 at Ita Faji market and it will last one month, the commissioner also stated that the reform would be piloted in four local governments including: Lagos Island, Ita Faji Market; Ikorodu, Igando and Badagry axis and that the reform would go live across the 20 local government areas and 37 LCDA on Jan. 5, 2020. The A.T.M approach refers to reforms in Abattoirs, Transportation and Marketing of beef in the state. The reforms in the Abattoirs makes it mandatory that all animals are to be slaughtered in registered abattoirs and are to be issued certificate of health and wholesomeness after inspection by veterinary doctors. The abattoirs in the state are given codes for tractability such that the codes tallies with the certificate and meat receipts.The meat receipt is issued to meat vendors that purchase already certified carcasses, and the number on the receipt matches that on the certificate of health and wholesomeness . 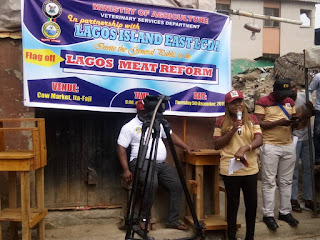 ( Dr Ojuri, explaining the A.T.M) Transportation: in Lagos it is only Eko refrigerated meat vans that must move beef. The vans have codes that matches the abattoir where the beef is processed and a number indicating its designated markets. The carcasses are transported to the markets in cool conditions under hygienic conditions. Market: In our markets now, only carcasses with certificates and receipts are allowed into the market. The certificate and receipt are the new pass for dispatch of beef in Lagos markets. The meat processed in hygienic conditions and transported in cool conditions are received in markets by well kitted butchers with clean overall,caps,gloves and safety foot wear. The beef is displayed in clean covered butchering tables that prevents unnecessary handling of beef by prospective buyers and also keeps flies and dust away from the beef.The butchering tables adopted in the markets are those made with Teflon cutting tops,to prevent splitting wood with meat when cutting it. The A.T.M strategy is to ensure only wholesome beef is available to the populace from abattoir to the market. Read also: 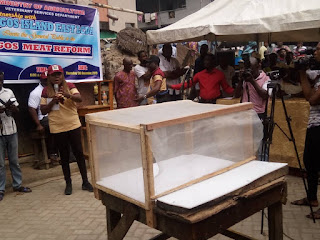 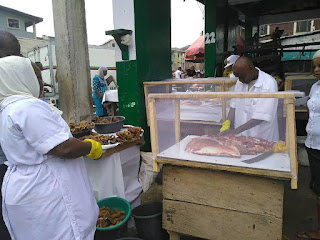 Posted by Bolanle Ojuri at 10:54 PM No comments: Links to this post