The importance of external parasites in pig production varies greatly among regions because of differences in climate and systems used to raise pigs. Sarcoptic mange caused by Sarcoptes scabiei var suis is the most important external parasite of pigs worldwide. Other external parasites include demodectic mites, lice, fungi and ticks. External parasites produce a range of clinical signs in pigs including rubbing, scratching, and skin lesions. Some parasites also cause significant economic effects due to reduced growth rate, reduced feed efficiency, and loss of carcass value at slaughter. Sarcoptic Mange. Two clinical forms of the disease are recognized: a hyperkeratotic form that most commonly affects multiparous sows and a pruritic or hypersensitive form that primarily affects growing pigs. The sarcoptes mite is a small, greyish-white, circular parasite about 0.5mm in length and just visible to the naked eye when placed on a dark background. Hyperkeratotic encrustations in the ears of multiparous sows are the main reservoir of mites within a herd. The boar helps to maintain infection in the herd because he is constantly in direct skin contact with breeding females and he remains a chronic carrier. If pigs are housed in groups, there is increased opportunity for spread. Piglets become infested during suckling. Environmental spread is less important but exposure for as little as 24 hours to pens that have been immediately vacated by previously infected pigs can result in infestation. The mite dies quickly away from the pig; under most farm conditions in less than five days. This is an important factor in control. If a herd is free from mange, it is one of the easiest diseases to keep out because it can only be introduced by carrier pigs. However, once it is introduced, it tends to become permanently endemic unless control measures are taken. In the acute disease,there is severe hypersensitive (allergic) mange in a sow.The common signs are ear-shaking and severe rubbing of the skin against the sides of the pen. Approximately three to eight weeks after initial infection, the skin becomes sensitized to the mite protein and a severe allergy may develop with very small red pimples covering the whole of the skin. These cause intense irritation and rubbing to the point where bleeding may occur. 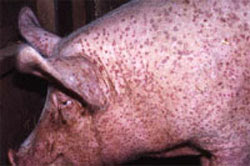 In the chronic disease, which is after the acute phase, thick encrustations develop on the ear, along the sides of the neck, the elbows, the front parts of the hocks, and along the top of the neck. Diagnosis of sarcoptic mange is confirmed by demonstrating the presence of the mite in the herd. The best method is to use a flashlight to examine the internal surface of the ears of breeding animals for encrusted lesions. A teaspoon is an ideal instrument to scarify material from the interior of the ear. This material can be spread onto a piece of black paper and left for 10 minutes. Turn the paper upside down to remove the material. Any mange mites present will be left adhering to the paper by the suckers on their feet. Mites can be observed directly or with a magnifying glass. Demodectic Mange In contrast to sarcoptic mange, demodectic mange is relatively unimportant in pigs. The mite is Demodex phylloides and it lives in hair follicles. The response to treatment is poor but the mite is sensitive to those acaricides used for sarcoptic mange control. Severely affected animals should be culled from the herd.
Posted by Bolanle Ojuri at 8:09 AM