Elephantiasis also called lymphatic filariasis causes extreme swelling in the arms and legs. The disease is caused by the filarial worm, which impairs the lymphatic system and can lead to the abnormal enlargement of body parts, causing pain, severe disability and social stigma. The infection occurs when filarial parasites are transmitted to humans when mosquitoes bites causing hidden damage to the lymphatic system. The painful and profoundly disfiguring visible manifestations of the disease, lymphoedema, elephantiasis and scrotal swelling occur later in life and can lead to permanent disability. These patients are not only physically disabled, but suffer mental, social and financial losses contributing to stigma and poverty. Elephantiasis is caused by several different types of parasitic worms, including Wuchereria bancrofti, Brugia malayi, and B. timori, with Wuchereria bancrofti responsible for 90% of cases and transmitted by the female culex or aedes mosquito. The B. malayi and B.timori responsible for about 10% of cases are usually transmitted by female anopheles or mansonia mosquito. When an infected female mosquito bites a person, she may inject the worm larvae into the bloodstream. The worm larvae reproduce and spread throughout the bloodstream, where they can live for many years. 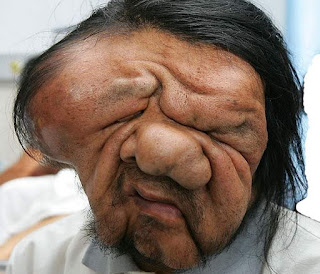 The parasites accumulate in the blood vessels and restrict circulation and cause fluid to build up in surrounding tissues. The common symptoms are 1) fever 2)swelling of arm,legs. 3)swollen testicles(hydrocele) more
Posted by Bolanle Ojuri at 1:31 PM