Farmer feeds fish with cassava peels and makes millions. Evangelist Peter Ododa, owner and proprietor of an agricultural company called New Life Farms Agriculture Nigeria Limited based in Angwan Jikwoyi, New Karu, Nasarawa State. The 54-year-old started farming with N6,000 about four years ago with a pond and a small hut. Today, he is the proud owner of 48 ponds within the farm land and also owns a plantation that is about two and half hectares where he grows guava, banana, plantain, cassava, maize and other crops. The mission of this farmer is to prove that nothing is a waste in this world. The farmer feeds his chicken and fish with various waste food items; for fish, he uses rejected bread, palm kernel, soya bean chaff, Barbara nut, cassava peel, rice chaff to mention but a few. He has also explored other waste products to produce fish feeds in such a way that in four to five months they grow very big. 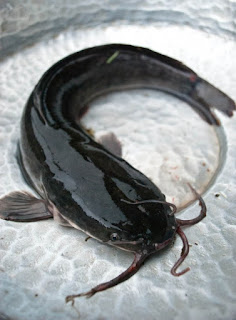 The fishes thrive well on these waste products ,and after feeding for two to five months, their weights were between 2-3kg which he sold and made a lot of money. This is how ,read
Posted by Bolanle Ojuri at 2:39 AM