Pill Expands In Stomach to Stay For Weeks Delivering Medication.

Pill Expands In Stomach to Stay For Weeks Delivering Medication.Many drugs require precise ingestion regimens that optimize the effect of the medication, but getting patients to follow the schedule is often easier said than done. Additionally, some drugs may work better if only they could be delivered continuously in small doses, over a period of days or weeks. At MIT and Brigham and Women’s Hospital in Boston researchers have created a capsule that expands in the stomach and delivers its drug payload in a controlled manner over an extended period of time. It consists of a flexible hub and six drug-loaded legs that are bunched together and stuffed inside a dissolvable pill. When the pill reaches the stomach, the legs of the device open up and prevent it from leaving the stomach. This lets the slow-release mechanism within the legs to deliver the medication over a long time. After a few weeks, the hub eventually dissolves, letting each leg go and having each small piece now able to pass further down the GI tract. 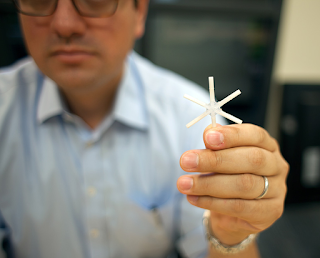