You might recall a particular photograph that caused quite a stir back in 1999. It was the photograph of Samuel Armas, then just a 21-week-old fetus, reaching his tiny hand out from inside the uterus to clasp onto the doctor’s finger during a surgical procedure to correct the birth defect spina bifida. The fetal surgery at the time was still a bold undertaking, just two years after the first of its kind in 1997. Today, 13 years after Samuel’s “Hand of Hope,” the amazing procedure has been performed on over 400 fetuses around the world 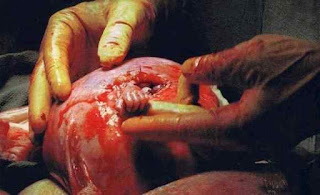 Spina bifida affects 1,500 births per year, making it the most common birth defect, but as the fetal surgery is performed in increasing numbers the outlook improves for a fetus diagnosed with spina bifida. The most dangerous form of spina bifida, called myelomeningocele, is a condition in which the spinal cord does not close properly and remains exposed. Ten percent of babies born with untreated myelomeningocele die, and those that survive will have severe disabilities such as paralysis and bowel and bladder dysfunction. The procedure begins by putting the mother under deep general anesthesia. That way not only does the mother go under but the fetus as well. In addition, the uterus relaxes which makes it easier to work with. An ultrasound is performed to get the exact position of the fetus, then an incision is made clear across from hipbone to hipbone. The surgery is then performed with the fetus still inside the uterus. Absorbable staples are used to pinch uterine blood vessels to minimize bleeding, and more staples are used to keep the uterine membrane out of the way. The spinal cord repair is the same procedure that doctors would perform on a newborn baby. It involves placing the nerve tissue back into the spinal canal and closing it up with a layer of dura, the tissue that normally covers the spinal cord and brain, a layer of muscle-like tissue, and lastly a layer of skin. The closure has to be watertight. One reason is to protect against damage from amniotic fluid seeping in, another is to prevent the leakage of cerebrospinal fluid. The decreased fluid volume leads to the hindbrain herniation and hydrocephalus associated with spina bifida. If the procedure is done early enough – ideally around 20 weeks – those abnormalities can be reversed.more Recently Dr Oluyinka Olutoye performed surgery on an unborn baby with tumor in her mother's womb. Dr Oluyinka Olutoye and his surgeon partner Dr. Darrell Cass of Texas Children's Hospital, carried out an operation on a foetus at 23 weeks in US. 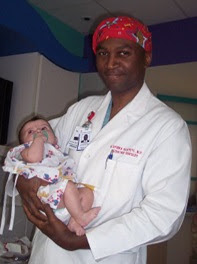 The baby, Lynlee Hope, who suffered from a tumour known as Sacrococcygeal Teratoma was removed from her mother's womb, operated on and returned back. She healed and continued to grow until she was born again at 36 weeks. This has earned commendations and honors from all around the world especially from Nigerians and the Nigerian government.continue
Posted by Bolanle Ojuri at 1:50 AM