Turmeric has a peppery, warm and bitter flavor and a mild fragrance slightly reminiscent of orange and ginger, and while it is best known as one of the ingredients used to make curry, it also gives ballpark mustard its bright yellow color. Turmeric comes from the root of the Curcuma longa plant and has a tough brown skin and a deep orange flesh. Turmeric has long been used as a powerful anti-inflammatory in both the Chinese and Indian systems of medicine. Turmeric was traditionally called "Indian saffron" because of its deep yellow-orange color and has been used throughout history as a condiment, healing remedy and textile dye. 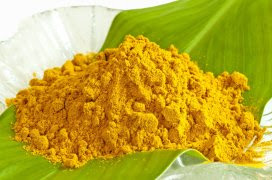 The volatile oil fraction of turmeric has demonstrated significant anti-inflammatory activity in a variety of experimental models. Even more potent than its volatile oil is the yellow or orange pigment of turmeric, which is called curcumin. Curcumin is thought to be the primary pharmacological agent in turmeric. In numerous studies, curcumin's anti-inflammatory effects have been shown to be comparable to the potent drugs hydrocortisone and phenylbutazone as well as over-the-counter anti-inflammatory agents. Unlike the drugs, which are associated with significant toxic effects such as ulcer formation, decreased white blood cell count, intestinal bleeding), curcumin produces no toxicity. Curcumin's antioxidant actions enable it to protect the colon cells from free radicals that can damage cellular DNA—a significant benefit particularly in the colon where cell turnover is quite rapid, occuring approximately every three days. Because of their frequent replication, mutations in the DNA of colon cells can result in the formation of cancerous cells much more quickly. Curcumin also helps the body to destroy mutated cancer cells, so they cannot spread through the body and cause more harm. A primary way in which curcumin does so is by enhancing liver function. Additionally, other suggested mechanisms by which it may protect against cancer development include inhibiting the synthesis of a protein thought to be instrumental in tumor formation and preventing the development of additional blood supply necessary for cancer cell growth. There are some evidence that curcumin can boost the brain neurotransmitters serotonin and dopamine. Curcumin can really help prevent heart disease, cancer and Alzheimer’s… then this would have obvious benefits for longevity.For this reason, curcumin has become very popular as an anti-aging supplement Turmeric useful in dogs; also as an anti inflammatory and antioxidant. see
Posted by Bolanle Ojuri at 10:53 AM