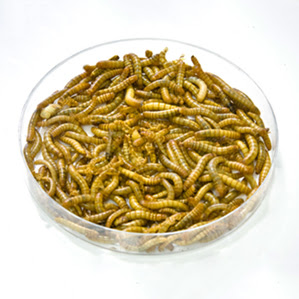 Insect Farming Is taking Shape as demand for animal feed rises;As the world grows hungrier for animal protein, insects could be the new way to feed livestock. However, food producers are likely to feel the pinch as the world’s population climbs to nine billion by 2050, while rising incomes in large countries like China and India lead to greater demand for meat-rich diets. So entrepreneurs, researchers, and even the United Nations are looking for an animal feed less expensive than the soybeans and fish meal typically used today. Insects like mealworms and fly larvae, a natural food for wild birds and fish, could be a near-perfect replacement. With several startups planning industrial-scale operations, it may not be long before some poultry or fish entrées are raised on a regular diet of bugs. 15 % of all wild-caught fish goes to feeding farmed fish, pigs, or poultry. Soybean production, about 95 percent of which goes into animal feed, has seen a significant spike since the 1990s and will reach record highs this year. But unless yields can be significantly increased, continuing this surge would mean gobbling up additional land and water. Not only do insects use far less of these resources than soy, but they also feed on food waste. Furthermore, they’re comparable to soy in protein content. Breeding trials conducted by the E.U. initiative PROteINSECT have found that one hectare of land could produce at least 150 tons of insect protein per year. By comparison, soy planted over the same area yields just under a ton of protein per year. Feeding trials also suggest that a bug-based diet will produce bigger, stronger livestock. In its 2013 report on edible insects, the Food and Agriculture Organization of the U.N. pointed to several studies on fish and Japanese quail in which ground crickets replaced up to 50 percent of the fish meal in their feed. The fish outperformed counterparts fed traditional diets on every growth parameter, and the cricket-fed quail laid more eggs than the control group. story credit; http://www.technologyreview.com/news/529756/insect-farming-is-taking-shape-as-demand-for-animal-feed-rises/
Posted by Bolanle Ojuri at 10:38 AM