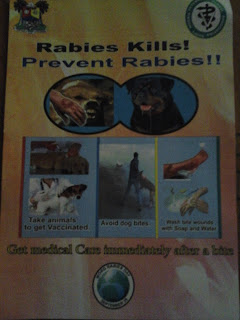 Rabies a deadly fatal but preventable viral disease that affects warm blooded animals and can also affect man being a zoonotic disease. The rabies virus is transmitted through bite of an infected animal, the saliva is the medium of infection. The virus usually transferred through bites from infected animals or from salivary secretions from infected animals on wounds,cuts and scratches. This mode of infection is usually common in the dumb form of rabies ,where the animal is docile, shy but drooling saliva. This form of rabies is the most dangerous as the animal is not a suspect, but rather the owner is cuddling and stroking the pet and coaxing it to eat and be social. The exposure to the drooling saliva usually results in transmission of the virus through mucous membranes, minor cuts and tiny bites,with the owner not seeking medical attention. The furious form of rabies is the most common and recognizable type,where the animal is very violent,drooling saliva, barking and chasing things or people. The animal with this form of rabies are usually sneaky,creeping up behind victims or suddenly charging out at animals or humans in his path. When a pet owner notices a sudden change that is violent ,with the animal barking,howling at moving objects,snapping and biting stuff and drooling of saliva,such animal should be reported to animal control for quarantine. When bitten by a dog ,cat monkey or bat carry out the following ; 1) wash the area with soap and water for at least 15 minutes and apply alcohol to the site and go to the hospital for post exposure rabies prophylaxis. The animal in question should be quarantined, while the person is getting the shots. People that have died as a result of rabies, is because they did not seek medical attention early,or the pet owner gave false report about the vaccination status ,thus giving the victim false hope that the pet is not rabid. This is the sad case of a boy bitten by a dog who supposedly had an up to date vaccination record,but alas!!! tragedy struck..
Posted by Bolanle Ojuri at 11:46 PM