Veterinary medicine: why is my puppy panting?

Veterinary medicine: why is my dog panting? Puppy Play: Puppies tend to have sudden bursts of energy where they engage in boisterous play and then they suddenly flop down and fall asleep. Since your puppy moves a lot, his heart beats faster and his respiratory rate is faster. Open-mouth panting in this case is a normal reaction that allows the pup to get more oxygen into his bloodstream. Pups with smashed-in faces such as pugs and bulldogs also tend to visibly pant more because of their shorter snouts. Puppy Emotions: Your puppy doesn't have to necessarily be tired to pant a lot. Puppies may also pant when they're excited, and with so much going on in a puppy's life, you can't blame them. If you're socializing your puppy and taking him to puppy classes, he's surely exposed to a whole lot of exciting sights and sounds as he discovers the world.more
Posted by Bolanle Ojuri at 8:10 PM No comments: Links to this post

Kissing your puppy could send you to the hospital; CDC says virus is spreading.

Kissing your puppy could send you to the hospital; CDC says virus is spreading. The Centers for Disease Control and Prevention (CDC) recently reported that 16 more Americans have been diagnosed with Campylobacter, an infection commonly found in puppies. The bacteria strain can be transmitted through close contact such as cuddling and kissing. According to the CDC, the latest report further marks a sweeping outbreak across the country, which has now affected 55 people in 12 states. Thirteen of these cases have required hospitalization due to severe diarrhea, vomiting, nausea, fever and cramping, the CDC adds. "Outbreaks of Campylobacter have most often been associated with unpasteurized dairy products, contaminated water, poultry, and produce. Most people who become ill with campylobacteriosis get diarrhea, cramping, abdominal pain, and fever within two to five days after exposure to the organism. The diarrhea may be bloody and can be accompanied by nausea and vomiting. The illness typically lasts about one week. Some infected persons do not have any symptoms. In persons with compromised immune systems, Campylobacter occasionally spreads to the bloodstream and causes a serious life-threatening infection,” the CDC stated in a Miami Herald report. According to the CDC, 35 people have reported purchasing a puppy from a Petland store prior to getting sick. The were also found to have either visited a Petland chain or lived in a home with a Petland puppy. The federal agency has also reported that 14 infected people are Petland employees. The federal agency has admitted to difficulties in containing the outbreak and has urged the general public to report any cases of infection. Likewise, the CDC has issued safety guidelines for dog owners. “Talk to your doctor if you think you have a Campylobacter infection and let them know if you recently purchased a puppy at a pet store, visited a pet store, or visited or live in a home with a puppy sold through a pet store before illness began.
Posted by Bolanle Ojuri at 8:06 PM No comments: Links to this post

An unexpected, real-life adventure unfolded for two women playing the popular new mobile game Pokémon Go. While waiting for a pizza they’d ordered to be delivered, Kaitlin Kouts and Tiffany Revay took out their phones and set about their Lufkin, Texas, neighborhood searching for an elusive Jigglypuff in the augmented reality game. What they found instead was an injured puppy in need of veterinary care. The pair told reporters that when they came across the puppy, he appeared to be in pain and was bleeding from the mouth. They looked for his guardian, but no one knew where the dog had come from. As the two were busy searching for answers and help, they received a phone call from their pizza deliverer, Skyler Jerke, who wound up playing an important role in saving this puppy. Read
Posted by Bolanle Ojuri at 6:45 AM No comments:

Puppy with fluid on the brain gets second shot at life. 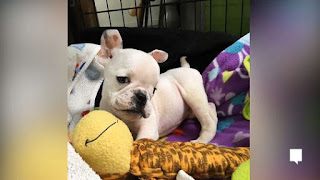 Herbie, a French Bulldog puppy believed to have excess fluid on the brain, is learning to walk and stand on his own at a therapy center. Herbie, a French Bulldog puppy, may be just a few weeks old, but he's already shown he has a big, fighting heart. When Herbie was dropped off at the house of a woman who fosters dogs, he couldn't walk or stand. Handlers suspected Herbie has hydrocephalus, or water on the brain, a condition that often ends in euthanasia for dogs. In Herbie's case, it made his foster mom and rescue group, Road Dogs & Rescue, work harder to help the puppy. The rescue group brought Herbie to Two Hands Four Paws, a large canine rehabilitation center in Los Angeles. Staff there say his progress has been exciting to watch. They fitted him with a tiny wheelchair, and are teaching him how to walk. Staff say Herbie is getting stronger everyday. A neurologist who treated Herbie said when he's 6-months-old, he'll be eligible to have surgery to drain some of the excess fluid on his brain, possibly giving him the happy, healthy life of many dogs. Contributed by USA TODAY.
Posted by Bolanle Ojuri at 7:16 PM No comments:

Dog breeders and pet lovers and owners have been warned continuously of dangers associated with dog importation.The breeders are supposed to ensure the dogs get the necessary vaccinations before they are sold and shipped off, but some mischievous breeders/puppy mill merchants dont vaccinate these pets thus exposing the pet lovers to a risk.The pets that are shipped branding certificates are often times discovered to be fake, thus strict documentation laws must be ensured and vaccination records verified to ensure safety. There has been cases of shipping off animals to other countries which were incubating various pathogens, a recent case is the rabid dog shipped to the US from Egypt (as reported by STAT http://www.statnews.com/2015/12/17/rabies-dog-cdc/) The rabid dog was transported into the country in May by an animal rescue organization. It was later discovered the dog’s rabies vaccination certificate was a fake, CDC officials said .It’s the fourth time — that officials know of — in the last 11 years that a rabid dog has been imported to the United States. Ten people who had substantial contact with the animal were advised to get post-exposure rabies treatment and eight more involved in its importation opted to get vaccinated as a precaution, CDC and state health department officials wrote in a report on the incident published in this week’s Morbidity and Mortality Weekly Report, a journal operated by the CDC.‘There’s no shortage of adoptable dogs in the US’ Dr. Nicky Cohen said the CDC issued guidelines last year to spell out what is needed, from a rabies control standpoint, to import companion animals to the United States. Chief among them: an authentic rabies vaccination certificate. It also pointed out some red flags to look for on rabies vaccination certificates to spot fakes — things like multiple dogs in a shipment having identical certificates or evidence that a dog’s name has been whited out. “It’s pretty basic,” Cohen admitted. “There have been four incidences where rabid dogs have been imported. But we do know that more dogs than just these four have been imported with falsified records. This was issued in response to the recognition of imported dogs with falsified vaccination records.”The dog from Egypt was part of a shipment of eight dogs and 27 cats. It was the only animal in the shipment that was infected. 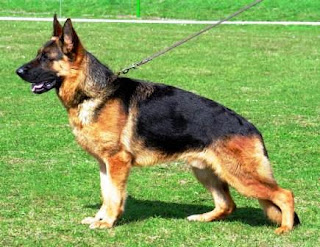 Posted by Bolanle Ojuri at 5:26 PM No comments:

2-LEGGED DOG GETS WHEELCHAIR FOR MOVEMENT.

- A puppy born without his front legs is rolling into a new life with the help of a new 3-D printed wheelchair.Tumbles was rescued from the cold when he was just 2-weeks-old, according to Friends of the Shelter Dogs in Athens, Ohio. The little guy has been able to adapt and scoot across the floor using his nose and back legs, but a veterinarian recommended he be fitted for a cart so he can build muscle in his back legs more naturally. The puppy got a new lease of life by using a wheel that allow movement easily.See more here;http://abc7.com/pets/meet-tumbles-2-legged-puppy-gets-3-d-printed-wheelchair/1085244/ 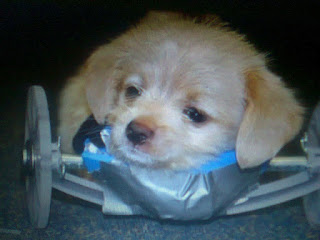 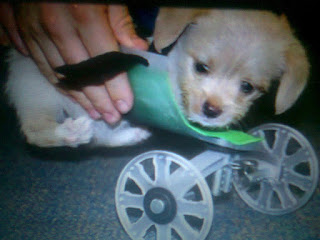 Posted by Bolanle Ojuri at 12:23 PM No comments: