3D printed meat opportunity analysed by Australia: 3D printed meat technology could be the “next big advancement” for the protein industry, according to a research paper published by Meat and Livestock Australia (MLA). 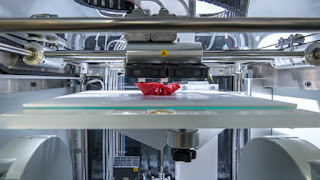 Posted by Bolanle Ojuri at 6:49 AM No comments:

Bird flu on Britain’s doorstep as virus hits Calais: A highly pathogenic H5N8 avian influenza (AI) strain has been detected in a flock of wild ducks in Calais, putting UK authorities on high alert.
Posted by Bolanle Ojuri at 6:12 AM No comments:

Human salmonella infections linked to live poultry. Salmonella is estimated to cause millions of foodborne illnesses around the world with over 30,000 hospitalizations and several deaths. Most persons infected with Salmonella have diarrhea, fever, and abdominal cramps 12 to 72 hours after infection. The illness usually lasts 4 to 7 days, and most individuals recover without treatment. In some cases, diarrhea may be so severe that the patient needs to be hospitalized. In these patients, the Salmonella infection may spread from the intestines to the blood stream, and then to other body sites. In these cases, Salmonella can cause death unless the person is treated promptly with antibiotics. The elderly, infants, and those with impaired immune systems are more likely to have a severe illness. Salmonella infections have trailed this year's thanksgiving as the bacteria reportedly survived cooking turkeys served for dinner.At least 33 customers of an American restaurant were sickened from the turkey served as part of a Thanksgiving dinner.Another 19 illnesses were reported after Thanksgiving with Salmonella suspected as the cause of the illnesses. At least 9 clusters of customers are involved. The sickened developed symptoms such as fever, abdominal pain, vomiting and diarrhea within about six to 69 hours. The foods eaten included imported American turkeys, vegetables, apple pie and pumpkin pie.continue
Posted by Bolanle Ojuri at 5:48 AM No comments:

Hepatitis A and food safety.

Hepatitis A is a viral liver disease that can cause mild to severe illness. The hepatitis A virus (HAV) is transmitted through ingestion of contaminated food and water or through direct contact with an infectious person. Almost everyone recovers fully from hepatitis A with a lifelong immunity. However, a very small proportion of people infected with hepatitis A could die from fulminating hepatitis. The virus is primarily spread when an uninfected and unvaccinated person ingests food or water that is contaminated with the feces of an infected person. The disease is associated with unsafe water or food, inadequate sanitation and poor personal hygiene. The risk of hepatitis A infection is associated with a lack of safe water, and poor sanitation and hygiene especially dirty hands.Safe water supply, food safety, improved sanitation, hand washing and the hepatitis A vaccine are the most effective ways to combat the disease. The hepatitis A virus is one of the most frequent causes of foodborne infection. Epidemics related to contaminated food or water can erupt explosively,as Hepatitis A viruses persist in the environment and can withstand food-production processes routinely used to inactivate and/or control bacterial pathogens. The risk of hepatitis A from food or water is a serious issue as approximately 3,000 people received Hepatitis A vaccinations after being exposed to the illness by the restaurant and in fact a lawsuit was initiated and a settlement of $200,000 has been announced. A settlement has been reached in the class action lawsuit against New Hawaii Sea Restaurant, formerly of the Bronx, New York. Approximately 3,000 people received Hepatitis A vaccinations after being exposed to the illness by the restaurant in September 2013 and all are included in the class-action lawsuit. According to the settlement, potential class members who may benefit by this settlement include anyone who ate or drank food from the New Hawaii Sea Restaurant from September 7-19, 2013, or were exposed to someone who did, and obtained a blood test and immune globulin (IG) or Hepatitis A vaccination shot within 30 days of eating at the restaurant. Those who actually developed Hepatitis A infections after eating at the restaurant are not included in this settlement. continue
Posted by Bolanle Ojuri at 5:04 AM No comments:

Latest NARMS report contains some positive findings;The National Antimicrobial Resistance Monitoring System (NARMS), established in 1996, is out with its latest data—covering the year 2014 and showing low levels of salmonella in poultry and meat in the United States. NARMS, founded in 1998, involves state and local public health departments and universities in cooperation with the U.S. Food and Drug Administration (FDA), Centers for Disease Control and Prevention (CDC) and USDA’s Food Safety and Inspection Service (FSIS). NARMS collects surveillance data from human clinical samples, slaughter samples and retail meat samples and tracks changes in the antimicrobial susceptibility of enteric (intestinal) bacteria found in ill people (CDC), retail meats (FDA), and food animals (USDA) in the U.S. NARMS data is used by FDA to make regulatory decisions designed to preserve the effectiveness of antibiotics for humans and animals.

NARMS found measurable decreases in salmonella present in retail chicken and ground turkey. More specifically, NARMS found that salmonella recovery continued to decline in poultry sources to the lowest levels in 20 years of joint testing. Salmonella prevalence reached 9.1 percent in chicken and 5.5 percent in ground turkey while remaining below 1.5 percent in beef (at 0.8 percent) and 1.3 percent in pork. A consistent decline in the proportion of salmonella isolates from retail chicken meat that are multi-drug resistant was also called out. Both food safety advocates and the poultry and meat industries are encouraged by the report because the findings are encouraging news for both reducing foodborne illness and curbing antimicrobial resistance. continue
Posted by Bolanle Ojuri at 4:26 AM No comments:

5 attributes of slow-growing broilers. There are five main attributes that can result from using genetics for slower growing broiler chickens, according to Claude Toudic, technical manager for Hubbard France. 1) Carcass and meat quality Toudic notes that research showed that broiler meat coming from the slow-growing Label Rouge breeding stock, commonly marketed in France, showed a higher filet dry matter and higher protein content when compared to conventional broilers 2) Antibiotic-free. According to a study done in the Netherlands, slow-growing broilers require six times less antibiotic-treatment than do traditional broiler breeds. 3) Animal welfare Toudic pointed to a study conducted by the Research Institute for Animal Husbandry, which revealed that slow growing breeders were five times less likely to develop heart and vascular diseases. The same organization’s research also showed that slow-growing breeds also experienced three times less trouble walking 4) Sustainability According to Toudic, there are sustainability benefits from slow-growing broiler production that encompass environmental issues, economics and social issues. 5) Image and product differentiation Consumers in today’s society are increasingly concerned about how food animals are raised. It is determined that because of animal welfare and sustainability initiatives, as well as those related to animal antibiotic use, that chicken meat from slower-growing birds better meets consumers’ image-related demands…

Please include attribution to www.wattagnet.com with this graphic.

Posted by Bolanle Ojuri at 2:37 AM No comments: